With the clock ticking on the three weeks we hear all the noise.

Let’s start with Chuck Schumer.
Your lecturing us that every time the President gets involved the congress gets messed up on the deal. Did you ever consider that it’s the lack of leadership by you and Congress that got us in this mess?
You have been there forever, the President for two years. What did you do for all that time except make deals, spend billions and solve nothing?
Where is the ROI for all your solutions over the years?
You senator have failed, and only because you are a Democrat and the MSM won’t call you on it have you survived.

Let’s talk about the public.
First I see a poll where you blame the President. Then I see when you are asked about the deals he was willing to make you said you didn’t know that.
Well it’s your fault you didn’t. Stop letting the media you watch lead you like sheep. You keep saying how smart you are, but the facts don’t support you. Try getting informed.

“Respondents in the latest poll were roughly split on whether the U.S. should build a wall or fence along the entire U.S.-Mexico border, from Texas to California: 45% of those polled supported the construction of such a barrier, while 52% opposed it. The president and lawmakers have grappled over the semantics of how to label various possible barriers—from a wall to steel slats to fencing—but each side enjoys broad support. And both supporters and opponents of a barrier feel strongly about it: 34% strongly support a wall or fence, and 40% said they strongly oppose one.

One of Mr. Trump’s central arguments for building the wall is that the border is un-secure. Fifty percent of Americans agree that the U.S.-Mexico border is not secure, according to the poll, while 34% of respondents said the border is secure.

That’s an interesting change from April 2013, the last time WSJ/NBC asked the question. Then, 63% of those surveyed reported that the border was not secure, while just 18% said that the border is secure. For years, the president has inveighed against what he describes as the threats of an unsecured border, while Americans have become less concerned about its security in the last five years.”

Here’s a graph that shows the divide: 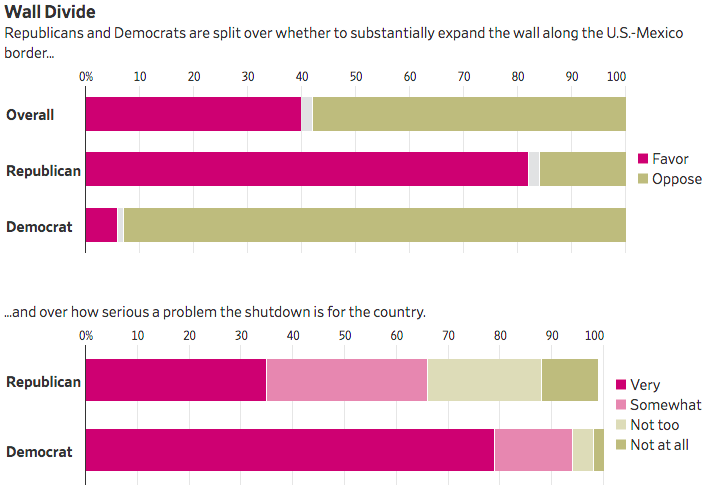 So clearly the President and team have failed to educate the public or move the needle in their direction. They are losing the battle, that we who want a secure border need them to win.

Next the President reinforces why he is part of the problem:

Did you see this tweet from him yesterday on Howard Schultz?

“Howard Schultz doesn’t have the “guts” to run for President! Watched him on @60Minutes last night and I agree with him that he is not the “smartest person.” Besides, America already has that! I only hope that Starbucks is still paying me their rent in Trump Tower!”

Really Mr President, you are calling yourself the smartest person in America? I have news for you, the smartest person in America wouldn’t call himself that.  You see he would let others do it and then say he was just smart enough to hire the smartest people. You could never do that and give others credit, which to me is pretty dumb. I think you confused smart with ego.
Also Mr President, it is not very smart to bring up “Trump Tower” with all the Russian Trump Tower in the news.

This was on top of this tweet yesterday:
“After all that I have done for the Military, our great Veterans, Judges (99), Justices (2), Tax & Regulation Cuts, the Economy, Energy, Trade & MUCH MORE, does anybody really think I won’t build the WALL? Done more in first two years than any President! MAKE AMERICA GREAT AGAIN!”

In the NYT editorial section today was this headline:
:“Howard Schultz, Please Don’t Run for President”

Also, did you see the reaction last night at his book signing? His former friends on the left calling him  every name possible because he is a centrist and would help reelect Donald Trump.
Welcome to the real world Howard.

And now Kamela Harris (the Democrat front runner and likely candidate today).
Free everything. I saw your rousing announcement. I want free too.
I think everyone should have a beach front home. A Caddy, a Porsche and Jaguar in their three car garage. Free gas and electric to use it all. The problem is how to pay for it right?
Well in the America I grew up in, you went to school, worked hard, followed the laws and earned things. No one gave it to you. And you know what? When you earned it you appreciated it more and treasured it. It is called capitalism and it drove my country to the greatest beacon of light in the world.
Giving things away has just led to a far less appreciation and desire for more free. As Maggie Thatcher said, “The trouble with Socialism is that eventually you run out of other people’s money.”